Twenty years ago, a small group of volunteers, a dedicated committee of activists and a nineteen and a half hour per week Community Employment scheme worker began to devise a response to the need they had identified, which was supports for women who were living within abusive relationships in West Cork.

If women wanted to talk about their situation and the abuse that they lived with every day, they faced many potential challenges. Given the largely rural nature of West Cork, a woman with no car of her own might not have any access to transport if she needed to leave the family home. Her isolation could be heightened if she had no sympathetic family or neighbour who would support her, often the case in very traditional areas, where there was stigma and disbelief attached to victims of domestic abuse. Services were often non-existent or not available locally. Often, there was an impact on the mental health of women dealing with abuse on their own, without support.

Over its twenty year history strong linkages have been fostered between WCWAV and health and mental health services, social services, the County Council, an Garda Siochana, the Court services, and many community and voluntary organisations.

Like many developments that begin as a response to local needs, twenty years after it started, West Cork Women Against Violence continues to provide a quality, consistent service to the women of West Cork, and many of the challenges facing those women remain the same. Over the past twenty years, WCWAV has consistently highlighted the issue of the lack of accommodation for women in emergency and crisis situations, and the absence of any refuge spaces in West Cork, since the service started.

WCWAV has developed some recent responses, including a service to support children who are exposed to and traumatised by DV in the home, and an aftercare support group for women who have left abusive relationships. More recently, we have been vocal in our support for the establishment of a Protective Service Unit in West Cork, so that there is a dedicated and adequately resourced Garda service with appropriately trained personnel available to victims of DV in West Cork area.

In 2019 the phone line, drop in service, outreach offices, court accompaniment, quarterly newsletter and awareness raising in the community continue to form the core of our quality, consistent service.

The organisation that had its modest beginnings in 1999 has grown, with five staff members and a Board of Management made up of 11 volunteers. Twenty years later, it is true to its original mission, to continue to provide a service to those women who are affected by Domestic Violence and who seek its support: they are at the very heart of the work of WCWAV.

This Organogram depicts the client centred nature of our work: 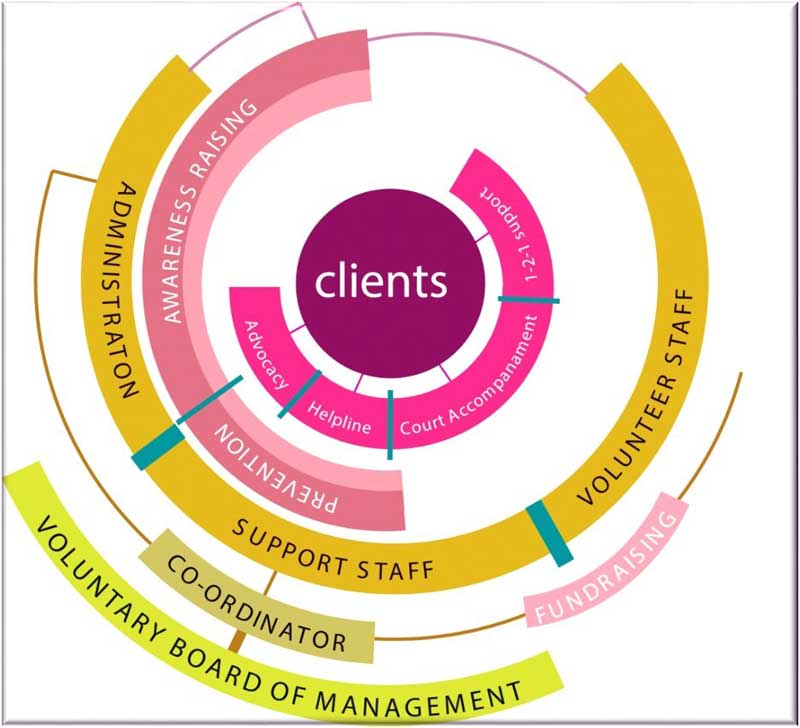 Get The West Cork Whisper
Directly to your Email

Violence against women is unacceptable!

We value all the help and support that we receive from organisations and individuals, and your financial support, whatever the amount, will help us to help those suffering domestic abuse. We all believe that violence against women is unacceptable. Freephone helpline: 1800 203 136
Donate Now